To be the best, learn from the best. This is your chance, now.

8 Books including Dr. Berge’s ‘The 7 Keys‘, pending its November 2021 release

the 10 Year Pathway never before released

*receive your unique password to access these restricted files to within 48 hours to allow for individualised encryption for your authenticity.

^pending the November release for The 7 Keys to bring your collection to 8 Books in total.

Book 1: The Secrets to Optimal Performance Success The coaching community is filled with an assortment of coaches, players and parents of varied experiences, levels and exposures to best practices. The Secrets to Optimal Performance Success is here to unravel the maze between the developmental player and the elite, and to discuss what separates the good from the great. What is holding back coaches from developing the elite is answered, whilst what is holding back developmental players from taking the next step towards elite status becomes evident throughout.

The role of the parent and their integral role in player development and their journey towards optimal performance outcomes plays an important role in the discussions on how these three: coaches, players and parents contribute towards optimal performance success. Presented is a discussion for all involved in the sports coaching community, irrespective of where you or your player is on the developmental scale, allowing you to finally access The Secrets to Optimal Performance Success – as a coach, as a player, and as a parent.

Book 2: The Secrets to Optimal Wellbeing

Your optimal wellbeing comes down to two things – how much energy you need to function, and what type of energy allows you to function at this level. It’s that simple. Balance is something highly sought yet rarely attained for good reason: nutrition that works for you, and fitness that works with you. The Secrets to Optimal Wellbeing gives you a 12 Week Guide and a map for the future. You will learn to create your own recipes whilst being given the foundations that will Guide you through the next 12 Week’s towards gut restoration and rejuvenation.

Attaining balance starts with your gut and getting your metabolism on your side. To grab hold of the body and health you have always desired, the 12 Week Guide gives you – straight into the palm of your hands – fitness from home, or wherever your life may take you. No more memberships. The Secrets to Optimal Wellbeing is your membership for keeping ahold of your renewed lifestyle – for good. Nutrition that encourages freedom, and fitness that is all about function: movement that works with you and your body, affording longevity in optimal wellbeing. After all, choosing happiness is key.

The role of the sciences in sport, as a whole, has been disputed up until now, and its indirect proponents tied to performance optimisation. This is no more. The Secrets to Optimal Coaching Success brings forward the sciences as a whole and presents a cohesion of the often complex presented jargon into a simplified and refined format for the real-world, with coaches, players/athletes and parents at the forefront. Near refuted up until now, the diversification of the optimal performance spectrum begins to shed light on the facets that truly count in developing optimal performance parameters.

The habitual characteristics of optimal coaching success is identified through the text, embedded inside each respective segment, a direct result of the latest scientific findings in the real-world. With established, and heightened significance to the sports coaching world, The Secrets to Optimal Coaching Success begins to unravel the road ahead and the expectations on the line to reach optimal success. Tied with direct and indirect relationships presented, and various coaching pedagogic traits, the secrets are progressively discussed with application and function at its core.

Book 4: What is Your Game Missing?

The tennis world has been rocked to its core. The shattering technical parameter to hit the game ensures tennis will never be the same — nor its players or coaches. History has been made. The power of scientific discovery and how it surges through time to infiltrate human adaptability and a players ultimate technical applications through impact has been unveiled — disclosed in full for the very first time in What is Your Game Missing? The V by Dr. B © is a consequence of science — a statistical end-point that delivers what the sporting world has never been privy too, until now.

A formula to secure a top 10 ranking has filled the dreams of thousands of tennis’ elite — past and present. But what if there was a technical parameter disclosed that directly correlates to securing and becoming, a one-percenter — in reality? The V by Dr. B © is a scientific marvel unleashed with The Rule of Transference introduced and how tennis is just the beginning. The future generation now has at its disposal the truth behind breaking down tennis’ elite whilst keeping longevity on their side. A whole new player is on the horizon without injury as their foe — bringing childhood dreams to life, courtesy of science.

Book 5: What is Your Game Missing, Now?

The anticipated sequel has arrived with a thump to dispel the long-thought myth of surface correlation with player results. An evolution of elite performance has been tracked down to initial athlete uptake and their inception into the game whilst beginning the discussion on phasing out injury in youth sports adoption from micro communities to macro scale affects synonymous with the movements of our time. A systematic scientific analysis of the prequel is followed to disseminate the technical properties of the best players in the world on the WTA and ATP tours over the course of back-to-back Grand Slams parallel with seasonal results, ranking maintenance and its disassociation of surface texture — clay and grass.

A transition is brought forward with a sandwiched blueprint of denoted regressions and progressions and the genome debunked to delivering the ‘top three’. Introducing a new take around the ‘top three’ and a correlation between players and coaches is revealed— noteworthy for newcomers. Those who dare cross the threshold and break the barrier need be deafening in their quest to become one of a potential three over the course of a season — another first unveiled. Seldom do these numbers change as The V by Dr B © is upheld and contributes towards player performance-sustainability and success.

Book 6: What is Your Game Missing, to Win? Long has it been thought that injuries are an end product of sports participation. From youth sport to elite dominance, the innate behavioural process of what it takes to identify between fact and opinion is brought forward to discern between truth and fabrications. The scientific undertone remains steady in its varied shapes as the sport of tennis is used to deliver a new road forward. Steps are identified to combat the injury crisis — from the elite playing group to youth activity rates with the elite granted years at their peak and how adolescent athletes can cross the threshold in the years to come.

A player’s technical proponents are laid bare with strengths, weaknesses and most telling, how to win against the best players in the world. In doing so, a much broader scale of impact sits on the cusp of change by incepting micro communities around the world. From increasing the rate of participation, removing the risk of technical injury whilst delivering a healthier, active and more robust population isn’t the only benefit. When it comes to the one-percenters of the elite, a new identifier in the golden rule not only weighs in on the role of a player’s relationship to the top, but perhaps the most substantial finding this decade: replicated success — to win more than one Grand Slam Championship. And tennis is only the beginning.

Book 7: I am Your Tennis Coaching Guru

Twenty years in the making and twenty years towards a Top 10 ranking. Never before has a scientifically underpinned pathway been within reach to divulge each milestone towards becoming a professional tennis player. But the perquisites provide the keys. The Secrets to Optimal series, to the What is Your Game Missing series, encompass the required knowledge, as I am Your Tennis Coaching Guru reveals for the very first time — the map of what was long thought impossible and void from the established collection. From the first 10 Years of play to the next decade of play, the imprint is shared before offering the key akin to pandora’s box, in the addendum — the 10 Years to come.

The 10 Year Pathway has been designed to interlink both series — sandwiched between developmental foundations to technical automation. Providing an entire season of lessons and planners over the course of five levels of play dispersed over 10 Years of progressions, the pathway arrives at a players ‘true north’. Instilling the aptitude for key decisions to forging an innate rhythm, key building blocks are established to become a ‘barrier breaker’ — a player set to secure a Top 10 ranking without readily being dismissed. The decade of play serves as a warning for current players and what’s to come in this now complete lifecycle as a new arrival awaits on the verge of rattling the Top 10 and leaving the risk of injury in their wake.

Book 8: The 7 Keys to Optimal Behaviour for Optimal Performance: a Top 10 ranking awaits using Predictive Analytics to predetermine your pathway to the top of the WTA or ATP tour

Upon purchase receipt, you will have access to your Download(s) within 48 hours to allow for individualised encryption for your authenticity. Each Download is authenticated to afford you your own verified copy and is encrypted for your assurance. This means only the holder of the key will be able to open the Download which is embedded with a unique reference, tied to the buyer’s ID to provide an added layer of security and verification for all buyers. 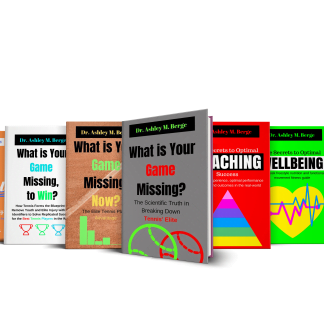 You're viewing: The Complete Collection Special Edition $7,599.00
Add to cart